Skip to main content
FTX: An opportunity to embrace regulation?

Cryptoassets are traded on a global basis. Indeed, the markets are even more global and constant than markets in more conventional financial instruments, rivalled only perhaps by the FX markets in their reach.

External administrators often occupy quasi-judicial offices which, among other things, require them to:

While the Judge-made doctrine of equitable mootness continues to beguile and often stymie parties-in-interest seeking to appeal an order confirming a chapter 11 plan (as well as other orders which are on appeal prior to confirmation of a plan), appellants in the Fifth Circuit can continue to rest assured that the doctrine will be applied only as a “scalpel rather than an axe.” That is because in the Fifth Circuit, the doctrine—which can be described as a form of appellate abstention—is applied only on a claim-by-claim, instead of appeal-by-appeal basis.

Recently, the Supreme Court of the United Kingdom released its judgment in BTI 2014 LLC v Sequana SA1. This marks the first occasion on which the nature, scope and content of directors' duties to creditors when a company is nearing insolvency (the "Creditor Duty") has been considered by the Supreme Court.

Last week, the Supreme Court of the United Kingdom released its judgment in BTI 2014 LLC v Sequana SA. This marks the first occasion on which the nature, scope and content of directors' duties to creditors when a company is nearing insolvency (the "Creditor Duty") has been considered by the Supreme Court.

"Credito Real is attempting to bypass Mexican and US insolvency laws and deploy a corporate liquidation statute with almost no protections for creditors.

The following briefing provides a round-up of the Cayman legal and regulatory developments during the third quarter of 2022 that may be of interest to funds clients. We are pleased to note that there is nothing critical or requiring immediate action at this time. 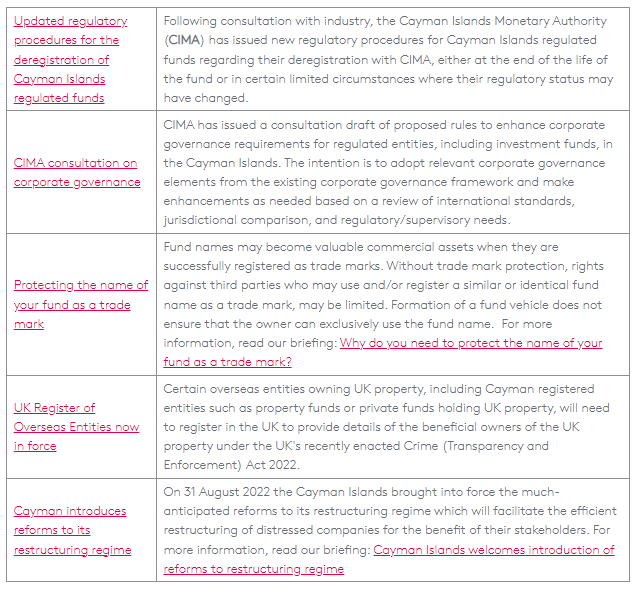 In a decision released on March 29, 2011, CDX Liquidating Trust v. Venrock Assocs., et al., 2011 U.S. App. LEXIS 6390 (7th Cir. March 29, 2011), the United States Court of Appeals for the Seventh Circuit, reversing the district court’s ruling, held that a director’s disclosure of a conflict, in and of itself, is insufficient to protect that director from liability for breach of fiduciary duty or disloyalty arising from that conflict.

The Government has issued a consultation paper regarding statutory audits and financial reporting. The consultation makes proposals in relation to four areas, namely directors, auditors and audit firms, shareholders and the audit regulator.

The UK Government published the Corporate Governance and Insolvency Bill on 20 May 2020. The legislation will be fast tracked and include both temporary and permanent changes to the UK insolvency legislation.

The temporary measures, aimed at supporting businesses struggling with cash flow and facing distress due to COVID-19, include prohibitions on presentation of winding up petitions and winding up orders, suspension of wrongful trading laws and the ability to apply for a moratorium.